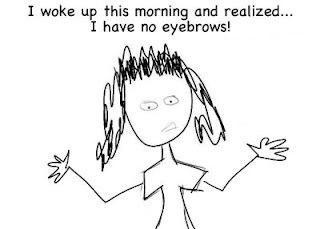 Losing the hair I got used to.. Shedding hair all over the place has become the norm plus I'm stacking up on scarves and started using them when I go out because the bald patches here and there started to show.. So that's okay now.. I don't care about it as wearing a scarf saves me the hassle of giving a damn how my hair looks..

But now what bloody annoys me and scares me shitless is the eyebrows and eyelashes.. They're going as well.. So far I can fill it in with brow make-up.. But after next chemo am sure its gona go.. Gona look so scary :/ YES YES I KNOW they will grow back adriiiiiiiiiii 7afatht edars.. But for the time being I will become hair-less, brow-less, and lash-less for at least the next 4-6 months..

i say its time for some creative artwork. i recommend making a Frida

*hug*
nothing is impossible , the word impossinle says I'M POSSIBLE , so can handle it enshala ;*
ajer o 3afya enshala :*

Be patient..i know it's difficult for all of us to be patient..but in time inshallah u will realise that the most improtant thing right now is to stay strong..:) and we are all here for u! I know that anything anyone says won't be half as helpful to how ur feeling.. *HUG* u r a wonderful person no matter what never forget that.

What happened about the results? Hope you are still on the same treatment.

Congratulations!! I'm so happy that you are responding xD!! Alf 7amd ou shikr ya rab!!

I love fourme.blogspot.com! Here I always find a lot of helpful information for myself. Thanks you for your work.
Webmaster of http://loveepicentre.com and http://movieszone.eu
Best regards

FourMe
Under Construction No More! I have been constructed. A Lady. A FIghter. And a Cancer SURVIVOR :D

The Cancer Chant..I Will Rant

Cancer I did not give you the right,
To invade my body and take a bite.
This is my body and with all my might,
I will prevail with one hell of a fight.
To the cancer inside, I will battle and kill.
For that is my body's God given will.
To my cancer, these words I do send.
Your life is short and near the end.